Garry Kevin Quinn was born in London on 22nd October 1971 and had four siblings.  Garry trained as a cabinet maker and joiner which became his trade, working for various firms across London.  Garry loved the countryside, the sea and animals.  In 2014, with his partner Angela they moved to a cottage in East Sussex where together they enjoyed the outdoor life.  Throughout his life Garry helped people, having a strong sense of responsibility that he should help others when they were in need.  Garry became ill and with the impact of the lockdowns and strains from the Covid-19 pandemic, his mental health declined.  He died at home on 29th April 2021 with Angela at his side. 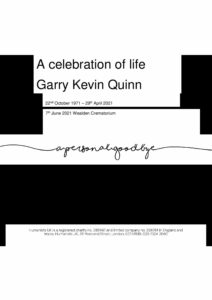