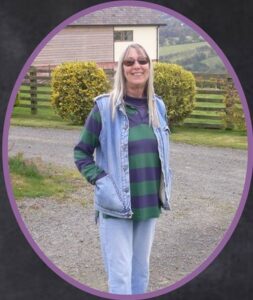 Janet was born on 6th December 1947 to John and Enid Rogers in Cardiff and had a younger sister, Pam. Always proud of her Welsh heritage, Janet was six, when the family moved to England. Through her father’s job at Copse Farm, Harrow Weald, Janet grew up in a world of farming and ponies where she developed her love of horses. She attended Harrow Weald Infants, Cedars Junior and Harrow Weald County Grammar schools before studying at Pitman’s Typing College.

Janet had a number of administrative jobs, including many years as Secretary of the Stanmore branch of the Pony Club, making many longstanding friends throughout. Janet’s interests included rugby; dressing up parties, planned and impromptu; and music, Elvis Presley was her particular favourite, and she liked to support local bands.

Janet’s first marriage was to Tony Masero, and they had a daughter Gina. Her second marriage was to Gavin Phillips, with whom she had a son, Tim. Janet was delighted in her grandson Oliver. 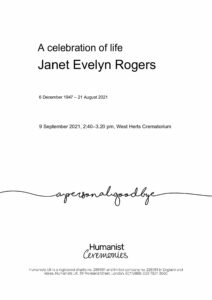 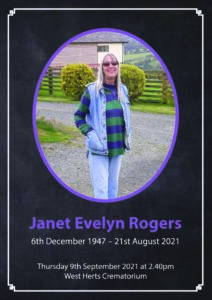