Gaye Elizabeth Bohane was born on 5th December 1957 in Tunbridge Wells. With less than three years between them, Gaye was close to her two elder brothers, Phil and Bruno. Her passion for gardens and cooking were inspired by her parents, and from her childhood she loved cats.

Gaye married Mark and they had two sons, Ben and Sam. Having moved to Worcestershire, Gaye started work as a night-carer in a children’s boarding school before working for many years at Worcestershire County Council, initially as a senior clerk in the team inspecting children’s establishments. In later years she was PA to the Director of Adult and Community Services and then to the Director of Public Health.

Gaye had worked with Robin at the Council, but it was several years later when a chance encounter led to their marriage in 2011. Taking early retirement in 2018 Gaye and Robin moved to Tunbridge Wells.  They bought a campervan and electric bikes, enjoyed visits to National Trust gardens and extended visits to Europe as well as spending more time with family and friends.

Over the years Gaye had long-lasting, close friendships, some from her early childhood, others from schooldays. She became a core member of ‘The Lettuces’, a close group of female friends who enjoyed holidays together, often in Pembrokeshire and celebrating special occasions, including Gaye’s 60th birthday in France. 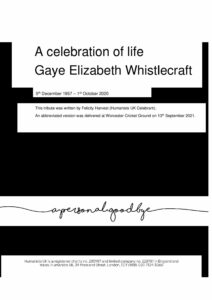