Dr Barry Randolph Martin (1936 – 2018) was born in Morden, Surrey, to Phyllis and George. He had one brother, Jim. In 1947, when he was 11, Barry won a scholarship to King’s College School in Wimbledon. In 1955, the family moved to East Grinstead and Barry won a scholarship to read mathematics at Merton College, Oxford. He went on to do a D. Phil at Sussex. Barry had a career in science. He worked at the Appleton laboratory on satellite projects including Ariel 5 and IRAS. Barry retired in 1996. He had two children, Clare and Jeremy, with his wife Philippa. He was grandfather to Adrian, Alex, Clarisse, Emma and Joe. Barry was in the Labour party and undertook a lot of voluntary work including becoming a governor of various schools. 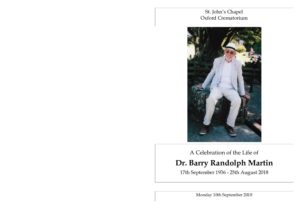 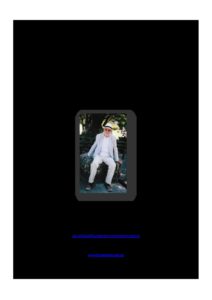 Celebrant and tribute contributor: Ian Willox
Tributes to Dr Barry Randolph Martin delivered at a Humanist funeral organised by their family. Including digital copies of: the funeral order of service, powerpoint presentation and presentation script. Also includes audio-visual footage of [Barry] and another man playing musical instruments, and two audio recordings of 'Adlestrop' (2018)