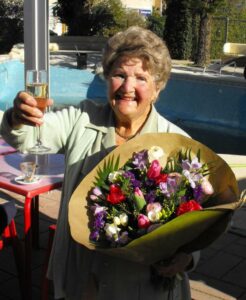 Phyllis Dorothy Mansfield (1922-2018) Phyll was born Phyllis Dorothy Rice in North London to Alexander and Florence Rice. She had a brother, Alec and a sister, Iris. During WW2 Phyll joined the Communist Party where she met her future husband, Geoffrey Mansfield, for whom she worked as election agent. Their two daughters, Jennifer and Elizabeth, were born in London before they moved to a house on the banks of the River Thames near Staines, in 1958. Having left the Communist Party in 1956, Phyll became a member of The Labour Party and became active in politics. She also volunteered for the WRVS as part of the ‘Meals on Wheels’ team. Phyll had two granddaughters, Sarah and Becky and a great granddaughter, Erin. 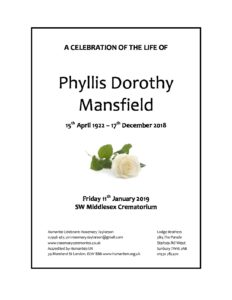 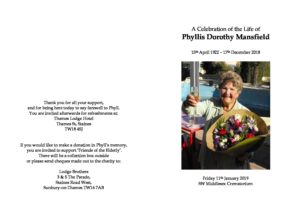 Phyllis Mansfield Archive Tribute (Word)
Celebrant and tribute contributor: Rosemary Taylorson
Tribute to Phyllis Mansfield delivered at a Humanist funeral arranged by their family. Includes a digital copy of the funeral's order of service and a digital photograph of Phyllis (2019)