Pauline was born in London on 29th December 1926. When she left school, she took a commercial certificate and found work as a typist and assistant secretary. She then trained as a physiotherapist and worked at Stewarts and Lloyds steel works in Corby before moving to Oxford in 1949 to work for Morris Motors. She met Ray Wilsdon at the tennis club, and they married on 25th August 1951 in Caincross Church, Stroud. They moved to Barton Lane in Headington and both learnt to ride horses and went pony trekking and to Point-to-Point events. Sons Mike (1957) and Tony soon came along. She was a hands-off mum, but that didn’t seem to harm her sons. She and Ray enjoyed opera, fine arts, holidays abroad and in the UK. She was a member of a book club, church recording, historical societies, and the Ashmolean museum. She enjoyed Giffords circus, the ploughing match and in particular beagling – especially the social side, organizing eggy teas for the Dummer Hunt, quizzes, walks and much more. Ray died in December 2015 and Pauline moved to a flat in Whitney where she kept herself busy until she started slowing down towards the end of Christmas 2019.

The tribute to Raymond Wilsdon can be found here 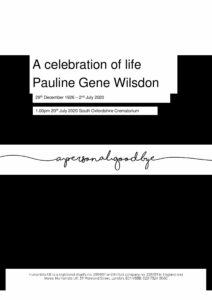