Ray was born in East Oxford to Alice and Frank Wilsdon on 25th June 1921, ten minutes ahead of his twin brother Cyril.  The twins had an older brother, Kenneth and a younger sister, Nancy. They all attended Southfield Grammar School. Their father died suddenly when they Ray was 10, and his grocery business failed, which put an end to Ray’s hopes of becoming an architect or a farmer. He left school at 14 and became a draughtsman for Pressed Steel. During WWI he worked on aircraft components, a reserved occupation, which meant he was unable to join the RAF as he would have liked, and as Cyril was able to do. After the War, Ray designed refrigerators, then returned to car production for about ten years before being made a finance and administration manager in the purchasing department of Pressed Steel Fisher, where he remained till retirement. He was a keen sportsman and enjoyed the countryside.

Ray married Pauline Milford on 25th August 1951 in Stroud and set up home in Barton Lane, Headington, where they stayed. His first of two sons, Mike, was born in 1957, followed by Tony. The couple enjoyed pony trekking and point to point, and later discovered beagling. Ray became Treasurer of the Dummer Beagles and enjoyed social activities up to his 90th birthday. He was also very active in the local conservation group, Friends of Old Headington, for whom he served as Treasurer and later Vice-President, and he also became Treasurer of the Parish Hall.

The tribute to Pauline Wilsdon can be found here 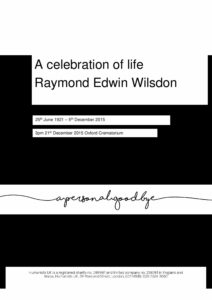