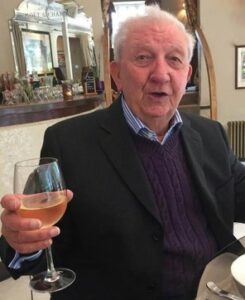 David was born 28th November 1930 in Stepney and lived there with his younger sister Joan (born 1935) through the early war years until their house was blasted out but they soon returned to the East End, living in new flats in West India Dock Road and then moving into a pub just off the Commercial Road. David left school at 14 and worked for his dad’s haulage business before training as a sewing machine mechanic. He continued to work with sewing and knitting machines, having a shop in Harlow and then working for Pfaff, Toyota and Knitmaster. David married Audrey when very young and they had two children, David and Janice, but the marriage ended in divorce. David married Anne Bodkin in 1971 and Louise was born in 1976 and Sam in 1978. Family and friends were a very important part of their married life and David found joy and laughter in many things. He remained close to his sister Joan and youngest sister Margaret and was proud of his East End heritage. He was always gregarious and friendly, but he missed Anne terribly after her death in 2012. He was determined to remain in ‘her house,’ where he died on 21st December 2020.

The tribute to Anne Hazard can be found here 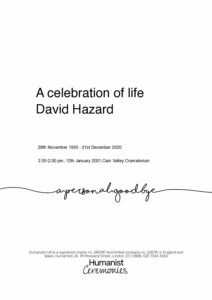 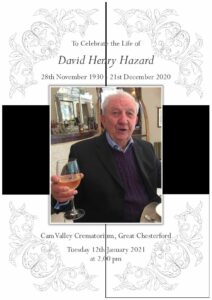