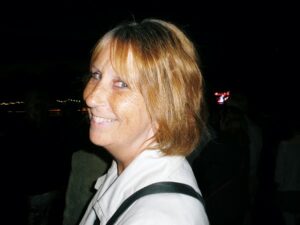 Anne was born 23rd April 1952 in Hayes Middlesex, the younger sister of John and Margaret and the daughter of Muriel who was a housewife and Reg Bodkin who worked as a station master on the London Underground. The family soon moved to Sudbury and after leaving school, Anne trained as a manicurist with Revlon in London them workers at a salon in Ealing Broadway. She first met her future husband David en route to a holiday in Italy with her lifelong friend Olivia and they married at Willesden Registry office 10th April 1971. Anne and David settled into married life and their children Louise (born September 1976) and Sam (December 31st 1978) joined David’s children from his first marriage, Janice and David, regulars at their house. Anne worked in the kitchens at Sawston Village College, Champak Tannery, Sawston Health Centre, Spicers, Bayer and Rocialle medical supplies before being diagnosed with ovarian cancer in July 2006. Time spent with family and friends was a very important part of her life and she enjoyed her dream holiday to Las Vegas and Miami in December 2009. Anne attended Arthur Rank Hospice and chose to be nursed there until her death on 19th April 2012.

The tribute to David Hazard can be found here 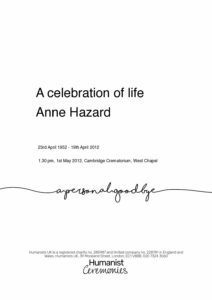 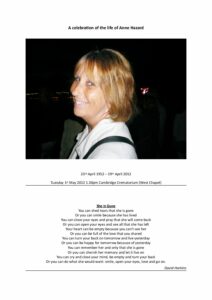